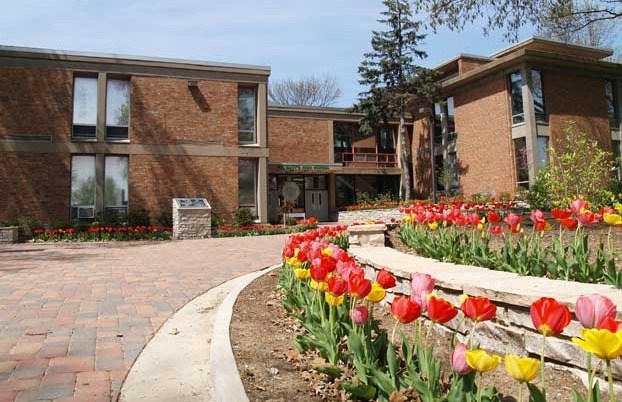 St. Mary’s High School, 4701 South Grand Boulevard, opened its doors under the name of South Side Catholic High School in September 1931. For the first two years, its teachers were Christian Brothers. The first classrooms were small wooden structures located on the property of St. Joseph’s Orphanage.

In September 1933, members of the Society of Mary (Marianists) took over the school. A faculty of ten Brothers of Mary taught 275 students. The school moved from the “portable” classrooms to the old St. Joseph’s Orphanage building in 1935, after the building had been remodeled for high school use. The first graduating class numbered 62. Affiliation with the University of Missouri and with the North Central Association was obtained in 1936.

Enrollment and faculty grew steadily from 1933, reaching a peak in 1946 with 1,100 students. The name of the school was changed from South Side Catholic High School to St. Mary’s High School in 1947.

What seems like a well-planned design emerged quite gradually, St. Mary’s High School began as a small wooden structure located on the property of St. Joseph’s Orphanage.

In September 1964, a new brick and concrete structure, located north of the old school building site, was completed and opened with an enrollment of 883 students. The new structure, valued at $1,500,000.00, comprised of 19 classrooms, three science labs, language lab, library, cafeteria, administrative offices, third-floor living quarters for 30 Marianists and a dining room for the Marianists. In February 1967, a new wing costing $374,420.00 was completed, including a new guidance complex, teacher preparation room, biology lab, chemistry lab, typing room, seven conventional classrooms and four classrooms that could be converted into two large size rooms accommodating 110 students each.

In 1988, ground was broken for a new athletic complex which, when completed, included a natural turf soccer/football field and a six-lane all-weather track. Lights were added in 1992.

On September 17, 1992, the gymnasium, which had been erected in 1938, was destroyed by fire. In March 1993, construction began on the Archbishop John L. May Athletic Complex. This complex included a state-of-the-art wooden floor, mezzanine with batting cage, along with an alumni meeting room and two weight rooms.

In 1993, other renovations were completed in the school, including the remodeling of the Media Resource Center and the installation of a computer network, which linked the computer room with the other academic areas of the school. This computer updating has enabled the school to expand its computer capabilities.

In July of 1998, St. Mary’s obtained from Catholic Charities the St. Joseph’s Chapel. Restoration began one year later. The St. Mary’s community now uses the chapel for both school and alumni liturgies. It has been renamed The Holy Family Chapel.

During the summer of 2000 renovations began on the third floor of the main school. This floor previously served as a residence for the Brothers of Mary. The goal was to create a fine arts wing for St. Mary’s in this area. A band room was created for the 2000-2001 school year. Two art rooms were added as of the 2001-2002 school year. Another classroom was renovated for use in the 2004-2005 school year. These projects completed the third-floor renovation.

In February of 2008, St. Mary’s purchased the St. Michael’s Apartments located on the west side of campus to expand the campus and make room for a new baseball complex and soccer practice fields. Also in 2008, the Center for Applied Sciences (CAS) building was completed and held its first classes. The CAS offers students an opportunity to learn hands-on skills such as A/C and D/C Electricity, Robotics and HVAC. In 2010, courses in Architectural Design, Graphic Design and Computer Programming were added to the CAS curriculum. After a $5,000,000 Capital Campaign "Divis Field" was erected in what was run down apartments acquired by Itaska LLC. On April 4, 2011, the campus was renamed St. Marys High School - Frank J. Bommarito Campus and the inaugural baseball season at Divis Field was the same day.

In the summer of 2012, work began on the R.V. Wagner Courtyard, formally the quad. Located between the Archbishop L. May Athletic Complex and the South Wing, the Courtyard is made up of bricks and pavers inscribed with messages from alumni, students, parents, and friends of St. Mary's High School.

Construction on the new state of the art artificial turf field began in June 2016. Enhanced stadium lighting was installed in August 2016. The grand re-opening celebration for the new Kresko-Miller Field was held on Friday, August 26, 2016.

INTO THE 21ST CENTURY

Technology has played a significant role in St. Mary’s meeting the demands of 21st-century teaching and learning. In 2004, the entire campus incorporated wireless technology enabling faculty and students to use laptops throughout the school. As a result of an extremely generous gift by the alumni association, 25 P4 desktop computers with flat screened monitors were added to the Media Resource Center, renamed the Kevin L. Hacker Center for 21st Century Learning in honor of his 30 years of dedication. Since 2009, St. Mary's has added netbooks and a new Mac lab, resulting in a student to computer ratio of 1.3:1. In 2012, the desktops in the Media Resource Center were again replaced with newer models.

In August of 2013, St. Mary's embarked on a new and innovative journey by introducing a One to One Device Program implementing Chromebooks to the Class of 2017. Each student has a Chromebook to be used for online textbooks, note taking, online research, e-mailing, creating documents and presentations, editing pictures and using a wide variety of Google Apps for Education in the classroom.

St. Mary’s has been responsive to the secondary educational needs of the Catholic families it serves since 1931. In 2005, St. Mary’s signed the Marianist sponsorship agreement formalizing the affiliation with the United States Province of the Society of Mary and 19 faculty members have become Lay Marianists since then. The Roman Catholic Archdiocese of St. Louis and St. Mary’s administration, faculty, and staff, without reservation, remain committed to quality instruction, faith formation and the development of the total student.